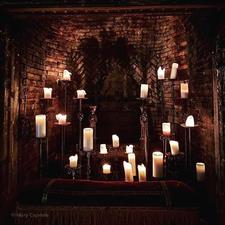 For the health and safety of all our guests and our staff, face masks are required.

With this in mind, “Candlelight Tours” are offered Thursday evenings during the months of July and August. Guides will escort visitors through the castle’s many rooms, placing an emphasis on the Hammonds themselves and the time that they spent in their castle home. Visit and immerse yourself in the lost era of quiet luxury and candlelight.

Spiritualism Tours are offered alongside our Thursday Night Candlelight Tours Program during July and August with a separate admissions process. These special tours delve into the history of the American Spiritualism Movement and the culture that formed around it, as well as the contributions of both Hammonds. We will discuss cultural phenomenons such as spirit photography and séances as well as the more scientific aspects of the movement such as Hammond’s research in ESP.