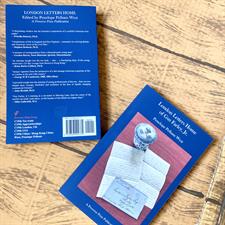 "London Letters Home from Gus Farley Jr. "   by Penelope West
The Talk: The talk will present a glimpse of the four years Gus spent in London apprenticing as a tea taster, preparing to join his cousins’ firm of Augustine Heard & Co. in China - 1861-1865.  Gus' letters describe the daily workings of the mid-19th century tea business in London and hint at his coming of age there. I will focus on the ships and tea trade aspects of his time in London.

Gus set off on his adventures in 1861 when he was just 17.  Gus was young, naïve, and alone in the big Smoke.  He encountered bullies in his lodging place, the hoi polloi crowding across London Bridge, clerks and fellow apprentices in the City, kind landladies, welcoming families, demeaning employers at Bullivant & Wilson and decent ones at Ripleys on Mincing Lane.  He roamed the streets of London, entered the Commercial Auction House, the Post Office, Customs House, and the docks. He rode to work on the Metropolitan subway line, just after it was finished.  He ventured out to the countryside, visited Scotland in June and Paris for Christmas, and attended a Scottish church, where he met young ladies from Nova Scotia.

He made a best friend: ‘At Ripley’s, there are two other young fellows whom I like very much.  They are preparing to go to China.  There is one about my age, who is situated about the same as I am.  He is from Glasgow, Scotland.’